I have long had this quesiton about milk and would really appreciate if you could answer this. I was wondering which one is the best milk choice. Some say cow - or animal milks aren't good because too much animal protein is not healthy; others say raw unpasteurised milk is a different thing all together and cannot be compared with pasteurised, homogenised supermarket milk especially if its grass-fed and organic. Some say soya isn't good for health either - so what shall I drink? Could you rank the following choices according to purely nutritional factors, such as nutrient profile and health benefits?
Which one is best? And why?

The question about which milk is best rests on the assumption that humans need to drink milk. The choice to drink a milk beverage is entirely a choice; it is possible to obtain all the essential nutrients (with the possible exception of B12) by eating a whole food, plant-based diet. While animal milk (from cows, goats, or sheep) carry health risks associated with all animal sources of protein, it is also not necessary to consume plant-based milk beverages. Strictly speaking, plant milk is a mildly processed food, so a 100% unprocessed diet might not include it. However, where to draw the line with processing is a personal choice - an argument can be made that cooking food is too much processing, and yet many people thrive on a cooked, plant-food diet.
The process of making plant milks varies from variety to variety, and sometimes the manufacturing of soymilk uses a little more processing (in the form of heat and/or pressure) than some of the others because most people prefer soymilk that doesn't taste like soybeans. This is not necessarily required with some of the nut milks.
However, in general the processing is minimal and if eating a plant-based milk helps you stick with a plant-based diet in the long-term, it may really support an overall healthy diet and lifestyle.
The number one thing to check when purchasing plant milk is that it is unsweetened. Most of the vanilla or chocolate flavored varieties, and even some plain varieties, have added sugar. This might be cane sugar, fructose, sucrose, or other syrup. Be sure to read the labels, because consuming liquid calories that includes added sugar is little better than drinking soda.
To address the question about the actual nutrient content, grassfed milk is not significantly different than milk from conventionally-raised animals in terms of macronutrient composition (total fat, protein, and carbohydrate). There is limited evidence that the types of fat in grass-fed beef is superior to conventionally raised beef, but the health risks most strongly associated with cow's milk comes from the excess of animal protein in the food. This is unchanged in grass-fed animals; there is still much more protein than humans need.
In this table, we can compare the macronutrient profiles for the variety of milks listed in the question. The animal milks listed are for full-fat milks - remember that as fat is removed the protein becomes a greater part of the whole, which further increases the excess of protein. The coconut milk listed is that sold in stores as a substitute for cow's milk - not the coconut milk sold in cans as a cooking ingredient (they are not extremely dissimilar though). Sources for the nutrient composition of the animal milks were the USDA Nutrient Database. Sources for  the plant milks were the manufacturer's published nutrient content. A

Hemp milk, or hemp seed milk, is a plant milk made from hemp seeds that are soaked and ground in water, yielding a beany-nutty cream-flavored substance. There are various options available for sale including organic, non-GMO, and conventional: unsweetened, original, vanilla, and chocolate flavored.

Production of hemp milk requires hemp seeds, water, and a blender. Many recipes call for ground vanilla or vanilla extract to add more flavor, and a type of sweetener. Once all ingredients are blended together some people pour the product over a cheesecloth and strainer to get a smoother and more refined milky texture. The straining process is optional.

In coffee drinks, hemp milk is said to produce better latte art and to have a texture more like cow's milk, compared to soy milk.[1]

In a 100 ml (gram, g) serving, hemp milk provides 46 calories from 3 g of carbohydrates, 3 g of fat and 2 g of protein.[2] Hemp milk contains no micronutrients in significant content.[2] Although there is limited history of use, hemp milk appears to be safe for those concerned about soy or milk allergies.[3]

From Wikipedia, the free encyclopedia 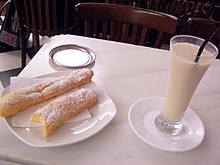 Glass of horchata de chufa in a cafe in Spain 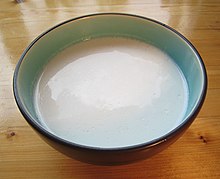 Coconut milk
Plant milk has been consumed for centuries in various cultures, both as a regular drink (such as the Spanish horchata) and as a substitute for dairy milk. The most popular varieties are soy milk, almond milk, rice milk and coconut milk. The protein content varies. It contains no lactose or cholesterol, and is usually sold with added calcium and vitamins, especially B12.
There are several reasons for consuming plant milk: ethical (animal welfare) reasons, environmental reasons, health reasons, including lactose intolerance, milk allergy and PKU; veganism and ovo-vegetarianism; religious reasons, such as by some Christian denominations during Lent; and simple taste preference.
In the United States soy milk was long the most popular non-dairy milk, but starting around 2010 almond milk began to increase in popularity, and in 2013 it surpassed soy milk as the most popular variety.[1] Other popular milks in the US are rice and coconut. In Europe soy and oat milk are popular. There is also hemp milk, cashew milk, hazelnut milk, and milk from peas and lupin.[2]
Plant milks are used to make ice cream, plant cream, vegan cheese and yogurt (for example, soy yogurt).

The most popular plant milks are almond milk, soy milk, coconut milk and rice milk. Hemp milk and peanut milk are also available. It can also be made from: